Studies have proven the positive impact of using a weighted hula hoop. Fitness experts claim that it's impossible to "spot reduce." Science is proving them wrong.

Weighted hula hooping may be fun, but it's a fitness activity that can be taken seriously.

A study at the University of Wisconsin concluded: “The findings from our commissioned study indicate that hula hooping [with a weighted fitness hoop] delivers a total-body workout that can improve flexibility and balance while strengthening the back, abdominal, arm, and leg muscles.” -Cedric X. Bryant, PhD, chief scientific officer of the American Council on Exercise (ACE). Read about the Wisconsin Study.

Even more compelling, a study by researchers at Canada’s University of Waterloo Spine Biomechanics Laboratory, one of the world's foremost sports medical research facilities, has now confirmed that regular weighted hula hooping causes the waist to shrink. The subjects were fourteen mildly overweight women who used a 4-lb "Powerhoop" hula hoop for fifteen minutes per day, five days per week, over a period of six weeks. The researchers collected several types of data, including calories burned, subcutaneous fat measurements, subjects’ body measurements and muscle activation.

On average, subjects experienced a significant decrease in waist and hip circumference, and waist‐to‐hip ratio. Average reduction in waist size was 3.35 cm, with three of the fourteen subjects losing between 5 and 7.5 cm around the waist. The hips also shrank, but not as much. (The "hourglass shape" was therefore accentuated.)

A 2016 study suggests that regular hula hooping may be a more enjoyable form of exercise than other options, such as walking. 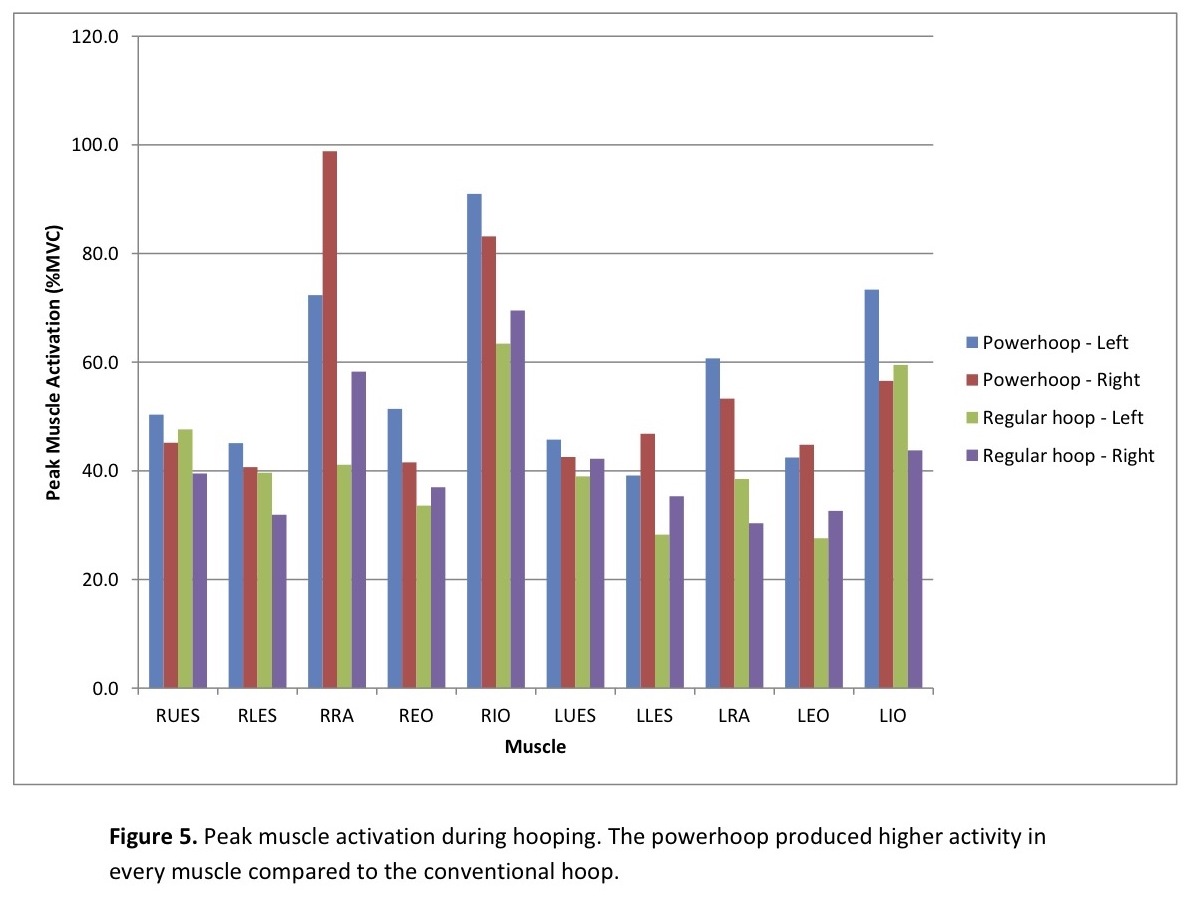 Additional findings from the Waterloo study:

Calorie expenditure during normal use varied from 300 to 420 kcal/hour: higher for inexperienced users and when the hoop was used in the “non-preferred” direction.

The participants lost on average 1.1 lbs, not reaching statistical significance, although two of the subjects lost over 6 lbs during the trial.

Muscle activation was significantly higher with the weighted hoop than with a traditional lightweight hula hoop. The comparison was made using a technique called electromyography, which calculates the impact of the hoop as percentage of the maximum voluntary contraction. Not surprisingly, the weighted hoop produced higher activity in every muscle compared to the conventional hoop. In the Rectus Abdominus (the main part of “the abs”), muscle activity was up to 70% higher.

The researchers also made a surprising finding regarding the distribution of fat on the body. On average, the subjects had slightly more subcutaneous fat (under the skin) after the study period, despite the fact that their waists were narrower, their muscles stronger and their bodies slightly lighter. One interpretation is that the amount of “belly fat” (visceral fat stored deeper in the abdomen) had decreased and redistributed itself, possibly as a result of the powerful “massage” effect from the hoop. This would be a sensational finding if proven to be true. Visceral fat is difficult to burn, and is linked to coronary disease, type 2 diabetes, insulin resistance, and other obesity-related diseases. For now, the theory stands with a question mark until the researchers have done a follow-up study, for example, using bio-electrical impedance analysis to measure the amount of visceral fat before and after the trial period.

Check your inbox to confirm your subscription